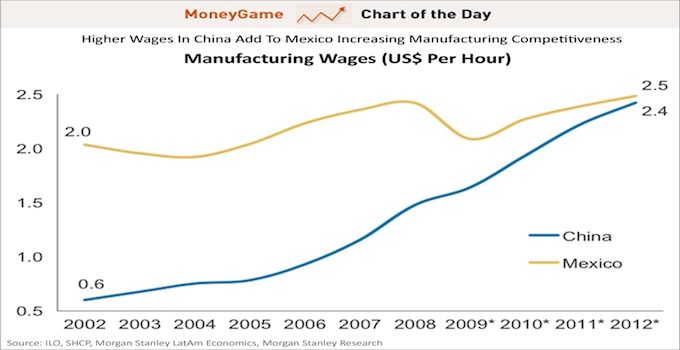 Morgan Stanley analysts, Manoj Pradhan and Johnathan Gardner, see rising overseas labor costs and anticipation of an energy revolution in Mexico, which will lower prices in the future, as the main reasons that Mexico’s economic tide is destined to rise.

Mexican production costs, when compared with those in the United States and its main low-cost competitor, China, will continue to be the source of Mexico’s sustained ability to attract billions of foreign direct investment dollars that will be pumped into the country’s manufacturing sector.

According to Pradhan and Gardner, there are three main points that create a favorable environment for sustaining competitive Mexican production costs, as well as the country’s emerging prominence as a North American manufacturing powerhouse. The future looks bright for the United States’ southern neighbor due to the fact that:

Additional members of the Morgan Stanley analytical team, namely Nikolaj Lippman and Luis Arcentales, assert that, in addition to the domestic and international drivers that are making its economy more competitive and sustaining attractive Mexican production costs, the special relationship that Mexico enjoys as an economic “partner” of the United States could “be felt across the Mexican economy for years, perhaps even decades.” Both analysts see the coincidence of attractive Mexican production costs, a resurgence in US manufacturing and the structuring and implementation of a series of deep and meaningful economic reforms in Mexico as constituting a serendipitous set of circumstances that will give Mexico a North American edge over its main low-cost rival, China.