Effect of 35% Tariff on U.S. Companies Doing Business in Mexico

What would be the effect of a 35% Tariff on U.S. companies doing business in Mexico? As with Newton’s third law of motion, for every action there is an equal and opposite reaction. This means that for every force there is a reaction force that is equal in size, but opposite in direction. Such is true in economics as well as in physics.

On the question of what effect would withdrawal from NAFTA have on U.S. companies in Mexico we find that offsetting economic forces come to play that balance the negatives with positives.  A recent release by CNBC discusses the negative effect that a 35% tariff would have on the entire US automobile industry, costing jobs.

Specifically, our findings are that U.S. companies doing business in Mexico will actually experience expanding markets, minimal effect on product costs imported back to the U.S. with stability and growth during a transition period.  Further, the complexities of withdrawing from NAFTA and current trade agreements have been tried multiple times throughout history and failed.

NOTE:  The assumptions being made on ‘Example Product Pricing’ are concept only and even though illustrative of costs incurred there is no intention for this to be an illustration of actual numbers and percentages experienced by production of the example product. 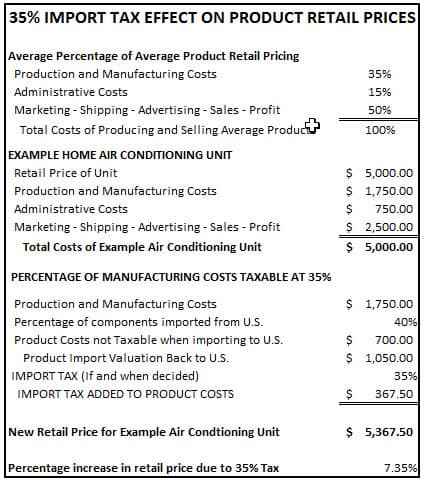 When we become concerned about a 35% tariff on imports we have to consider that the tax is levied on only a small portion of a product’s retail pricing in the market place.  As an example, let’s review a home air conditioning unit that retails for $5,000.  The actual cost of manufacturing this product is only 35% or $1,750.  Added to this cost is corporate overhead and administration of 15% for $750 and the largest portion of retail cost is marketing, advertising, distribution and profit of 50% or $2,500.  When we consider that 40% of the components used in manufacturing in Mexico are imported from the U.S. and are not ‘affected by a 35% tariff the import value of this air conditioning unit is $1,050, which is then taxed at 35% for $367.50.  This $367.50 raises the cost of the unit in the U.S. from $5,000 to $5,367.50.  Not a game changing factor.

Since it has signed trade agreements in three continents, Mexico is positioned as a gateway to a potential market of over one billion consumers and 60% of the world´s GDP. Mexico has a network of 10 FTA’s with 45 countries, 32 Reciprocal Investment Promotion and Protection Agreements (RIPPAs) with 33 countries, 9 trade agreements (Economic Complementation and Partial Scope Agreements) within the framework of the Latin American Integration Association (ALADI) and is a member of the Trans-Pacific Partnership Agreement (TPP) ‍.

WHAT DOES THIS MEAN TO U.S. COMPANIES DOING BUSINESS IN MEXICO?

Say our President, the Senate and the House of Representatives make the decision to back out of NAFTA (unlikely), those American companies doing business in Mexico will be positioned for a windfall.

Let’s look at what happens if these companies are in Mexico.  Mexico has trade agreements with 45 countries that waive import and export taxes and tariffs.  This means that U.S. companies manufacturing in Mexico are then able to export directly from Mexico, without returning their products to the U.S. and access markets exceeding one billion consumers.  All at lower costs to those consumers.

As in physics every action has an equal and opposite reaction and the same runs true in economics.

Such a move by the U.S. Government would cripple American based manufacturing companies and would actually accelerate movement out of the U.S. into Mexico.

(3) HOW LIKELY IS IT THAT THE U.S. WOULD WITHDRAW FROM NAFTA?

The U.S. has not withdrawn from a trade agreement since 1866.  The President does have the authority under NAFTA Article 2205 to issue an executive order placing a 35% tariff on all products imported from Mexico.  The question of if the President has the authority to withdraw from NAFTA without the Senate and House authorization is in question and is believed would be ultimately decided by the U.S. Supreme Court after years of unproductive indecision.

Regardless of how it exactly plays out, it’s not likely that withdrawing from NAFTA will do much to help American workers. Some of those jobs could in theory go back to America, but higher labor costs would weigh on profits of U.S. companies. More likely, American companies would seek to produce in other countries with low wages.  The solution for the U.S. is higher education focused on technology, software development, new product innovation and superior products.

Reviews of writings on this subject point only to confusion which would bring endless debate. The probability of negotiations to improve NAFTA for all participants is the most likely scenario.

Specifically, our findings are that U.S. companies doing business in Mexico will actually experience expanding markets, minimal effect on product costs imported back to the U.S. with stability and growth during a transition period.  Further, the complexities of withdrawing from NAFTA and current trade agreements have been tried multiple times throughout history and failed.

The Role of the Mexican Customs Broker

Mexico is a Beneficiary of The US-China Trade War

What would be the effect of closing the US-Mexico border?