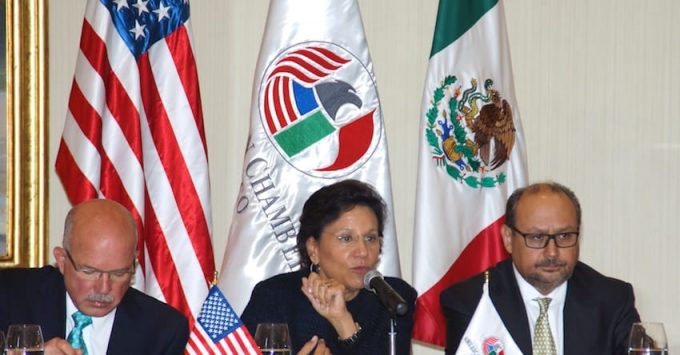 Mexico and the US are neighbors that work well together

In many industries, the combination and use of materials, labor and skill sets, as well as components and assemblies originating and produced on each side of the border has created an economic partnership with Mexico that has resulted in the manufacture of products that can out-compete those made in other regions of the world on the basis of price and quality. This case is best made by observing the supply chain integration that exists in the North American automotive industry.

Since the signing of the NAFTA in 1994, foreign direct investment in the North America, from all sources, has skyrocketed from a total of an annual US $110 billion to US $650 billion in a less than two decade span of time. Much of this significant portion of this inflow of capital has made its way to Mexico’s automotive manufacturing industry. Today Mexico is fourth largest exporter of automobiles in the world. Eight out of ten cars produced in country are sent to for purchase to consumers in other nations. The number of Mexican passenger vehicles sent outside of its borders are only eclipsed by foreign sales made by German, Japanese and Korean car companies.

One automotive plant alone, VW’s Puebla faciity, emmploys 16,000 Mexican workers and produces half a million passenger vehicles during a calendar year. VW’s economic partnership with Mexico began in 1962, and, today, the company operates the largest automotive production plant in North America. Volkswagen’s huge presence, as well as growing production in Mexico by other firms such as BMW, Nissan, Toyota, GM, Chrysler and others serve to expand opportunities for growth for US suppliers and the individuals that they employ to produce auto parts, components, assemblies and sub-assemblies that are integrated into finished product south of the border. Under the NAFTA Regional Value Content (RVC) must be 60% of transaction value.

Today the US economic partnership with Mexico accounts for trade between the United States and Mexico that is valued at a hefty US $1 billion per da. It is a little mentioned fact that the US exports more of its manufactures to its southern neighbor than it does to the emerging market BRIC couuntrie combined. From a broader perspective, the Washington, D.C.- based think tank, the Brookings Institute, has calculated that the total value of goods and services that the United States currently sends to Mexico can be realistically valued at approximately US $2.3 trillion annually, which, in 2013, supported 11.3 American jobs.

Contrary to opinions held in some quaters, a prosperous economic partnership with Mexico is good for the United States.