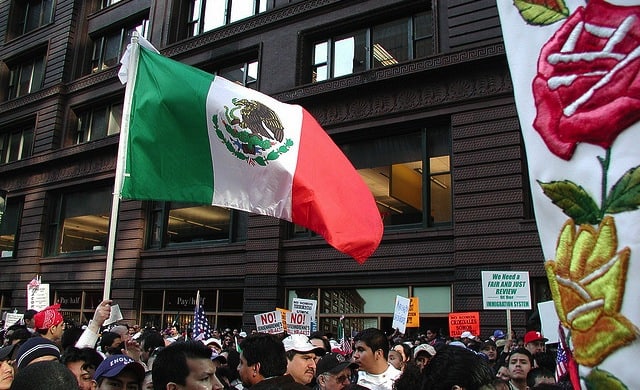 On Tuesday, October 22 a crowed of about two thousand maquiladora workers in Cudad Juarez to the streets to protest the pending legislation that would result in significant changes to Mexico’s tax regime. Some of the more contentious provisions will have a direct affect upon the maquiladora industry and its ability to generate sources of employment, as well as compete internationally.

The estimated number of maquiladora workers in Ciudad Juarez that left their plants to express displeasure over the legislation was in the vicinity of two thousand. It was also reported that the workers were came from fifteen of the over three hundred maquiladoras, or ‘twin plants,’ that are located in Ciudad Juarez. Additionally, a number of commercial drivers joined the street protesters with their rigs.

Of particular importance to the maquiladora workers in Ciudad Juarez is the provision that increases the value-added-tax for items purchased on the border from eleven to sixteen percent. The measure’s detractors point out that this could do do damage to retailers in Ciudad Juarez by providing a greater economic incentive for residents to cross the border in order to do more of their shopping in El Paso, Texas.

From the standpoint of border industry, the percentage increase in the VAT is not the issue, the issue is payment of the levy. Until this point in time, factories producing for export under the IMMEX, or maquilaora program, have been exempt from paying the Mexican value-added-taxe on imported machinery, equipment and materials used in the fabrication of their products. Some industry insiders, such as Claudia Troitino de Gonzalez, believe that the over two hundred and twenty-eight thousand maquiladora workers in Ciudad Juarez will be negatively affected, since this will be the first time that the VAT tax will be paid. This could hamper industry growth, and the job creation that results from it. Troitino de Gonzalez is the president of the Maqiladora Association of Ciudad Juarez, known by its Spanish acronym, AMAC.

Although, under the law, maquilaora’s would receive a rebate of value-added-tax paid on equipment, machinery and raw materials, the legislation does not state the timeframe in which request for reimbursement will be processed by Mexican tax authorities. Paying the tax for the first time, will tie up significant sums of working capital.

The bill has already passed Mexico’s House of Representatives. It is anticipated that it will be passed by the Mexican Senate, in its final form, sometime during the month of November. Until legislation is finalized, however, industry watchers, management and maquiladora workers in Ciudad Juarez are sure to do more to hear their voices heard to influence outcome.

Read the primary source for this post at the Las Cruces Sun News.