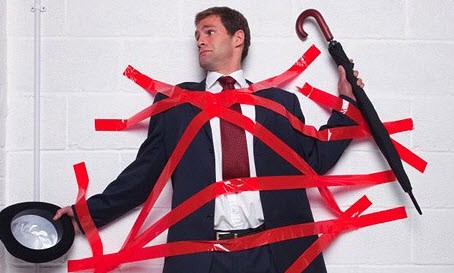 Throughout the history of the United States, business has, for the most part, thrived and blossomed under a system that espoused a governmental approach of laissez-faire. But this has been changing for many years, and businesses are now feeling the burden of government over-regulation.

The entire US Constitution is a mere handful of pages, yet each year, the US government passes new restrictions and regulations on how companies operate, each of which is often hundreds of pages long. In recent years, the mountain of regulatory paperwork complicating business in the US has reached staggering proportions.

According to a 2014 study by the Brookings Institution, ever since the 1970s, the entrepreneurial climate is dwindling. There has been a steady and steep decline in new start-ups for the past four decades, with one notable exception. The chart clearly shows a reversal during the Reagan years, known for their aggressive deregulation focus. Except for those few years, the US has not been conducive to a thriving business atmosphere overall.

Among the more notable examples of over-regulation, consider Dodd-Frank, passed in 2010. To this day, many of its provisions have not yet been fully detailed. It began as 848 pages, yet the regulations are literally growing years after the regulatory bill passed. This is but one illustration of the nebulous nature of the regulatory atmosphere in the US.

Learn more
Each year, hundreds of new pages of government over-regulation are added, and almost none are ever subtracted. And companies have to sort through this mountain of paperwork every time they make an acquisition, transport goods, build, or make a new hire. The scene is always changing, growing more and more complicated.

Many Choose to Leave due to Government Over-Regulation

For many companies, hiring more attorneys and accountants is not the cost effective answer. As complicated as moving operations to another country appears to be, many find the regulatory environment just south of the border to be a worthwhile trade off for moving to Tijuana, Juarez or other locations in Mexico.

Just last month, for example, news broke of two more manufacturing plants in Indiana, servicing the heating and air conditioning industry, are packing up and heading to Mexico, where officials estimate they will save approximately $65 million each year. When asked if it were the saving or something else prompting the decision, executives for the two United Technologies Corps. plants responded emphatically that 53 federal regulations restricting their industry motivated this move.

Another example of this trend can be found within the battery recycling sector. US recycling plants are dwindling, while Mexico’s are booming. Why is this? Some have pointed to Mexico’s simpler and fewer lead-emissions restrictions for the answer. As it turns out, battery recyclers have nine times fewer governmental regulations than the US to deal with.

These are not isolated cases. According to a recent survey of some 10,000 former Harvard Business School (HBS) grads carried out as part of the school’s U.S. Competitiveness Project, large companies are not investing in the US as much as before. And one of the chief reasons given was fewer or less expensive regulations in foreign countries like Mexico.

Perception is that reasons for moving manufacturing to Tijuana or Juarez, Mexico are driven only by economics.  This is now proven to be false as government over-regulation is surfacing as a prime motivator.