Manufacturers have two notable concerns regarding the implementation of the USMCA 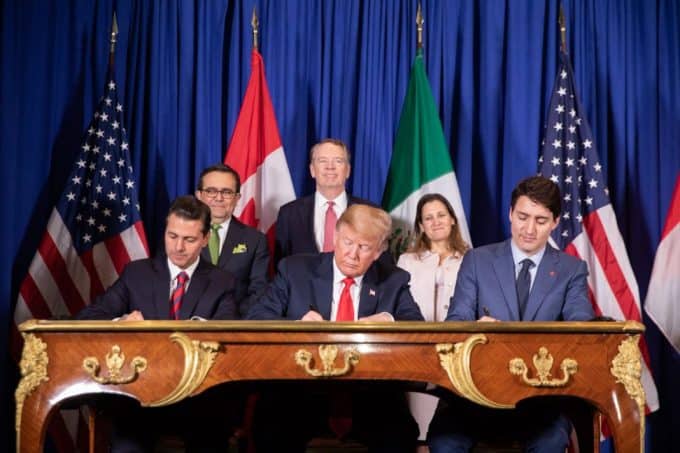 According to officials that represent Mexico’s National Council of the Maquiladora Industry and Export Manufacturing (Index), labor and political issues could affect the July 1, 2020 implementation of the USMCA, otherwise known as the United States-Mexico-Canada Free Trade Agreement.

With the soon to be enacted implementation of the USMCA, Mexico’s export manufacturing, or “maquiladora” industry is ready to comply with the rules of the new agreement.  Eighty percent of the maquiladora industry’s production is purchased by customers in the United. States

According to the president of Index, Luis Aguirre Lang, most of the companies in the industry have been at work implementing policies and procedures that will enable them to operate in accordance with the implementation of the USMCA.  As a means of preparing export manufacturers for the changes to come, Mexico’s Secretariat of the Economy has been assisting companies in the sector by providing the required training.

Mexican concerns over the implementation of the USMCA

Despite preparation and movement forward toward the implementation of the USMCA, two major concerns have been raised.  One issue has to do with the handling of labor disputes.

Labor issues were a major congressional concern throughout the USMCA negotiations and remained an issue after the three signatory countries (the United States, Mexico, and Canada) concluded the agreement in 2019.  The other area of concern has to do with the new rules of origin that are defined in the agreement.

In the first instance, some of the provisions of the USMCA leave the possibility open that US labor organizations may be able to lobby to initiate procedures against their Mexican counterparts. Maquiladora industry executives are concerned by the possibility that American trade unions and their memberships will attempt to exceed the bounds of their national sovereignty in order to interfere with domestic labor issues in Mexico.

The coming implementation of the USMCA accord includes some changes to the chapter dealing with other labor matters, as well, that were sought by trade unions in the United States.  For instance, treaty negotiators were lobbied by representatives of the auto parts, metallurgical, and mining sectors, in particular, to include new measures dealing specifically with employment contracts, trade union rights, union elections, and collective bargaining mechanisms.  With regard to employment contracts, Index member companies began to make adjustments in 2019 so as to guarantee their compliance with the provisions of the new accord.

Additionally, some Members of Congress criticized the original text of the USMCA chapters on labor and dispute settlement (DS) and negotiated with the Trump Administration to have the agreement amended.

Key changes that were made include the following:

This provision ensures that the formation of a panel in dispute cases in which a party refuses to participate in the selection of panelists.

This change shifts the burden of proof by stating that an alleged labor violation affects trade and investment, unless otherwise demonstrated.

This provision adds a new rapid response mechanism to provide for an independent panel investigation of denial of certain labor rights at “covered facilities,” as opposed to a government inspection.

The implementation of the USMCA creates a new interagency committee, labor attaches, and reporting requirements to Congress on Mexican activities related to its labor reforms.

Doubts remain regarding rules of origin

Compliance and registration related to regional content requirements is proving to be difficult for companies in some industries.  The automotive industry is one of the largest sectors that is especially affected by new rules of origin requirements.  This is the case because its supply chains run through multiple countries for parts and labor.

In response to the challenges that relate to determining a product’s origin, many companies have contracted with foreign trade consultants to assist them in improving their tracking and registration processes to comply with the requirements that have been outlined under the implementation of the USMCA.

Although under the USMCA no standardized Certificate of Origin forms required.  Proof of origin requires that companies:

“I certify that the goods described in this document qualify as originating and the information included in this document is true and accurate.  I assume responsibility for providing such representations and agree to maintain and present upon request or to make available during a verification visit, documentation necessary to support this certification.”