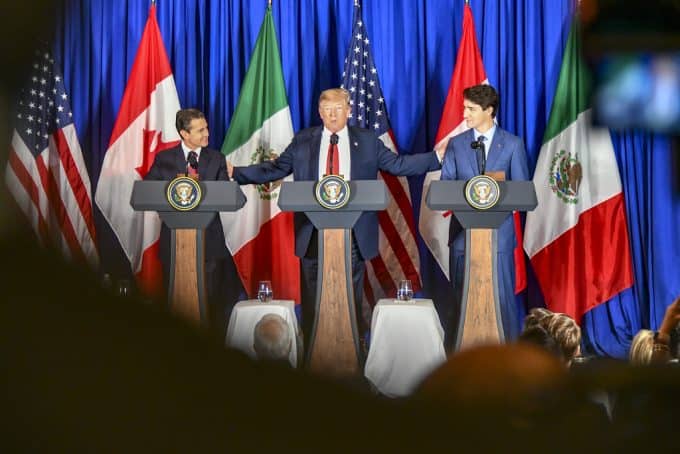 The new USMCA trade agreement entered into force of law on July 1, 2020.  The challenge that it faces, in addition to strengthening the economy, is to become an instrument for achieving greater human progress and social welfare throughout Mexico as a whole.

After 26 years of existence, this past June 30th ended the era of the North American Free Trade Agreement (NAFTA).  The USMCA, the new North American free trade agreement, will be in effect until 2036 and will be subject to review and revision every six years.

Over the two-and-a-half decades that it was in force, the NAFTA spurred appreciable growth in the volume of Mexico’s imports and exports, as well as precipitated a significant boost in its Gross Domestic Product (GDP).   Mexico’s prominent position as one of the main global trading partners of the United States was consolidated, as well.  NAFTA became one of the central instruments that drove Mexico’s growth.  This was the case mainly in the northern part of the country where most Mexican export manufacturing (maquiladora) activity is located.

The beginning of the era of the USMCA is taking place in the midst of a global environment in which the world economy is being negatively impacted by the COVID-19 pandemic.  The new North American free trade agreement, the USMCA, has entered into force of law during a time when predictions indicate that the global economy will contract by an order of 4.9% during the present year.

North America is not exempt from this trend, as well, as prognostications estimate that in 2020 the United States’ economy will recede by an order of 8.0%, Canada will contract by 8.4%, and Mexico will see its economic output decrease by 10.5 percent.  Most experts agree, however, that once the global pandemic subsides, pent up demand will be the source of a robust renewed economic growth.

It is important to observe that the result of the economic slowdown in Mexico has been a noticeable dip in gross fixed investment.  For instance, the month of March saw an 18% decrease in total expenditures for machinery and equipment purchases.  More striking is that, during the month of April year over year manufacturing output decreased by a significant 29.6%.

During the month of May, exports of goods manufactured in Mexico showed a reduction of 58.7 percent at an annual rate.  The most significant setbacks were observed in the automotive sector, with a reduction of just over 90%.  As activities resume during the third and fourth quarter of 2020, it is expected that the pace of production in the Mexican automotive industry will gradually reach its pre-pandemic levels.

As the new North American free trade agreement continues to be implemented, it must be utilized as an instrument that contributes to Mexico’s sustainable development.  Over the last five decades of the country’s industrialization, 77% of Mexico’s wealth has been generated in five entities in the nation’s north.  These motors of Mexican growth included the states of Baja California, Nuevo León, Chihuahua, Sonora, and Tamaulipas.  In addition to generating income for the country, these five states have absorbed 83% of foreign direct investment that Mexico has received since the late 1960s, have been the sources of 47% of the nation’s exports, and have received 59% of national investment in infrastructure projects.  In recent decades, as a result of increasingly steady industrialization, five central-west entities have become integrated into the supply chains of northern export manufacturing production.  These states include Jalisco, Querétaro, Guanajuato, Puebla, and Aguascalientes.

When the economy recovers from the adverse effects of the COVID-19 virus, the challenge in the era of the newly implemented USMCA is to increase its role and utility as a mechanism that promotes economic and social welfare and human progress in the states in Mexico’s south and southeast.  This area has been developmentally left behind and includes the states of Chiapas, Oaxaca, Guerrero, and Veracruz.   In these entities, employment is not of the same quality as that found in the north of the country. This is reflected in income levels.  For example, a worker in Tapachula, Chiapas typically receives an income that is 20 times lower than a laborer in the Mexican border town of Ciudad Juarez that is performing a similar activity.

For the new North American trade agreement, the USMCA, to be considered to be successful Mexican authorities must act to bring the country’s south up to developmental levels found in the industrial north.  Doing so will require that efforts be made to: