Border Adjustment Tax vs. Advantages of Manufacturing in Mexico

Border Adjustment Tax vs. The Unmistakable Advantages of Manufacturing in Mexico

In recent months, there has been talk about the US federal government implementing a border adjustment tax to address the problem of US companies outsourcing manufacturing jobs to Mexico. Yet Mexico offers US companies distinct and unmistakable advantages that will more than offset such a tax. Indeed, manufacturing in Mexico remains an extremely attractive option for many companies whose corporations benefit the US by offering their products at increasingly competitive rates.

The proposed tax is an attempt to address several concerns, and advocates believe this tax is the best avenue to do so. Among the desired outcomes the border adjustment tax legislation is intended to bring about are:

An Example of Mexico’s Unmistakable Advantage

There will be numerous debates and articles written about the pros and cons of such a tax, and whether or not it will accomplish positive impact. But for now, let us only consider whether or not such a tax would indeed be cost prohibitive for manufacturing in Mexico. 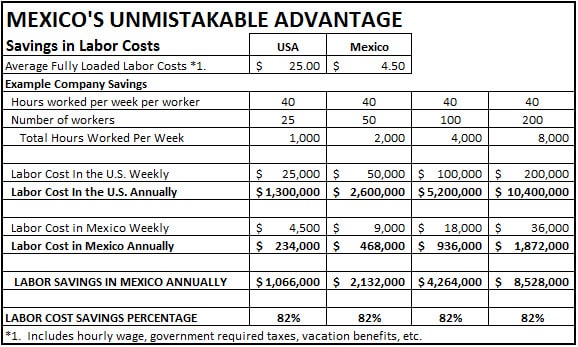 EXAMPLE:  The Cost of Manufacturing a Washing Machine

Consider the following real-life example of a product and what the effect would be on the bottom line of a company moving some of its manufacturing to Mexico if the proposed border adjustment tax is applied:

Let’s assume a 20% border adjustment tax is placed on all products produced in Mexico and imported into the US. 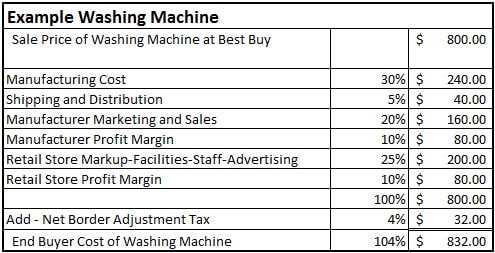 When viewed in this light, it becomes apparent that a $32 tax is a relatively small price to pay for the significant benefit of lower costs of manufacturing in Mexico. And in fact, the increase would likely be added in the form of a 4% retail price increase for the end user. Calculating the cost of the tax and weighing against the advantages Mexico offers US producers, it becomes clear that Mexico’s lower production costs wins over the proposed border adjustment tax costs. If the proposed tax is fully implemented, this one advantage alone still makes manufacturing in Mexico an attractive option for many US companies.

For information on subjects such as this our readers are encouraged to visit our blog at https://www.tecma.com.

Advantages of working with a shelter company in Mexico

Common Errors made in ISO 9001 Quality Systems in Mexico

Mexico and the US are top trading partners

NAFTA In Motion: One vision. One mission. One North America.

Chinese Manufacturing Companies Moving to the US