NAFTA Trade Talks Will Continue into 2018 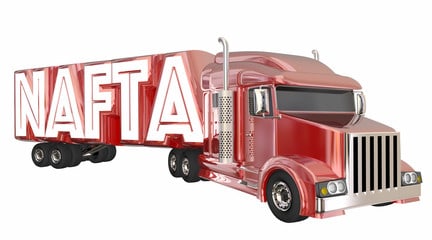 NAFTA Trade Talks Will Continue into 2018

At the conclusion of the recent fourth round of negotiations, the three parties involved in the NAFTA trade talks communicated that their joint efforts to update the pact will in all probability continue into the first quarter of 2018.  The goal that they have set for themselves is to conclude their labors prior to the Mexican presidential election, which will take place July 1, 2018.

Although there are several thorny issues that are now being addressed by the negotiators from the three countries, the US is not moving to scrap the agreement.  Among the biggest challenges faced by the US, Mexico, and Canada has to do with the rules of origin for the North American automotive industry.  Currently, to be considered “originating” in the NAFTA region 62.5% of the value of an automobile must be comprised of North American inputs.  In the NAFTA trade talks, the lead negotiator for the US, Robert Lighthizer, has stated that the Trump administration would like to see the number raised to 85% with 50% from the United States.  There are those, however, that believe that raising NAFTA content requirements will do the industry harm.  Today, 40% of the value of vehicles produced is in US supplier content.

Failure of The NAFTA Trade Talks Would Lead to Net Job Losses in the U.S.

In a recent study commissioned by the American Automotive Policy Council, it has been concluded that “The Trump administration’s push to change the automobile rules in North America will lead job loss and higher costs for manufacturers.”  According to the Motor Equipment Manufacturers Association, higher costs in the form of new tariffs will “lower demand for costly technology and safety features.”  The Boston Consulting Group stated that changing the rules of origin for the automotive industry could have an adverse impact on up to 24,000 jobs.  Also, another American research firm, Impactecon, has conducted studies that predict even greater job losses if the NAFTA agreement is not successfully renegotiated.  According to the firm “the United States would lose 256,000 net jobs,” and the “most severe impact” would be on low wage employment.  Additionally, “Mexico would lose 953,000 net jobs, and Canada would lose 120,000.” Since the NAFTA’s inception, however, the auto industry has created efficiencies through the establishment of extensive cross border supply chains.  Most observers of the NAFTA trade talks believe that the three parties will iron out their differences and that the agreement will remain intact.

Another industry group that is watching the NAFTA trade talks with intense interest is made up of American farmers.  This is so because Mexico and Canada are two of the biggest markets for US agricultural products.  In fact, Mexico is the number one foreign buyer of US grown corn and soybeans.  Before the NAFTA this market was completely closed to American producers of the former.

The NAFTA has widened access to Mexican and Canadian markets in other areas of agriculture, as well has provoked a significant increase in the export of US beef to Mexico.  NAFTA has been very good for farmers overall.  The US ran a healthy twenty-billion-dollar trade surplus with Mexico in agricultural products in 2016.    If the NAFTA agreement is scrapped a number of key commodities would see large tariffs imposed on their import into Mexico.  For instance, pork carcasses would face a duty of 20 percent, smoked pork bellies would see a duty of 10 percent imposed, wheat would have 15 percent tariff levied, beef would incur a 25% rate, and chicken and potatoes both would be charged a 75% duty.

Farmers are worried that a failure of the NAFTA trade talks would cause setbacks vis a vis the lucrative new markets for their products that the treaty has created.

What If There Were No NAFTA?

The three parties to the NAFTA trade talks publicly state that they want to see the pact “mended” and not broken.  Since the agreement came into effect in 1994, United States trade with Mexico and Canada has increased threefold.  In fact, trade with United States’ two NAFTA partners has grown faster than trade with the rest of the world.  After the recently concluded fourth round of negotiations, however, negotiators cite that there are “significant conceptual gaps” in the bargaining positions of each party.  Given the level of uncertainty generated by the yet to be concluded negotiations, many are wondering what a post-NAFTA world would look like.

An after-NAFTA period would usher a rise in the cost of goods from Mexico for consumers.  The average tariff rate for imports into the United States will average 2.9%, while the average rate for Mexico of duty for goods entering Mexico will be 4.6% with some exceeding 35%.  Items entering into Canadian territory would be hit with an average 2.7 percent import tax.   If NAFTA talks unravel, duties will be set by the World Trade Organization’s Most Favored Nation (MFN) rules.  Although these taxes may seem to be modest, the affect that they would have on the supply chains in some industries most notably automotive, would be considerable.

Even though the Trump administration has been trashing the NAFTA since before assuming power, it is unlikely that the agreement will be relegated to a place in the dustbin of history.   An abandoning of the trade accord would lead to negative consequences in many industries, most notably in the automotive and agricultural sectors.

Authorities in both Mexico and Canada tend to view the Trump’s NAFTA rhetoric more as a negotiating ploy and attempt to gain leverage than a serious move to abandon a trade scheme that has considerable support in farm states and other parts of Trump’s political base.

For further information on NAFTA trade talks the reader is encouraged to review our blog at https://www.tecma.com/