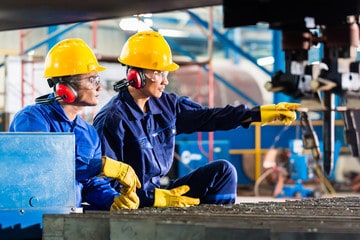 Wages in Mexico are the lowest in Latin America

One of the original purposes of the NAFTA was to create a middle class in Mexico that has the acquisitive power necessary to purchase goods imported from its two neighboring trading partners. In practice, however, and under certain circumstances, low wages in Mexico has proven to be a competitive advantage.

The government of Donald Trump wishes to see wages in Mexico rise as a part of its objective to reduce the number of US companies that move south of the border. Low wages in Mexico, which that country’s economic officials contend make the entire NAFTA region more competitive, is one of the reasons that many companies find investing in Mexico to be an attractive option.  However, according to Trump, this is one reason why the United States has a large, US $64 billion trade deficit with its neighbor to the south.

While wages in Mexico have on average increased four hundred and twenty-four percent across the Mexican economy since the NAFTA was implemented, this overall upward movement has not been sufficient to create a level playing field for U.S. and Canadian workers.  In the Mexican manufacturing sector, wages have had a real decline of 14.7% during the last ten years, while those of American manufacturing workers have risen at an average rate of 18.7%.  Taking this information into account there are five reasons that U.S. President Donald Trump wants to see wages in Mexico rise.

The current US administration is of the belief that Mexico’s low manufacturing wage is one of the reasons why the nation’s businessmen are opting to move jobs beyond the country’s southern border.

When the NAFTA came into force in 1994, the minimum wage in Mexico was equivalent to almost five US dollars per day, while in the United States the minimum income was US $34 for every eight hours worked.  This means that when the trade agreement began, Mexican minimum wage workers earned only 14.5 percent of what Americans earned in terms of dollars.

In 2017, things have not changed very much.  Those who earn minimum wage in Mexico today are paid 80 pesos a day.  This means that their income reaches only US $4.46 a day.  This represents a 9.3% reduction since 1994.   Currently, a Mexican that collects such wages in Mexico earns only 7.7% of what an American earns in terms of dollars.  The minimum wage in the United States has been US $7.25 since 2009.  This represents US $58 for an eight-hour workday.

Although the Mexican minimum wage has grown significantly, mainly due to annual adjustments (from 15.27 Mexican pesos a day to 80.4 pesos), this nominal growth has been insufficient to match those of the US and Canada due to Mexico’s depreciation of its national currency.   Because wages in Mexico have not grown as fast as those in the US and Canada’s, for a vast swath of the population, the standard of living has not improved greatly since 1994.  The Trump administration sees an improved standard of living in Mexico as an essential factor to reduce illegal immigration to the United States.

The Lowest Wages in Latin America

Although it is agreed that salary is a limitation on its workers, it can be said that the country is “cheap” to live in when compared with other nations. The purchasing power in Mexico is higher than in some Latin American countries due to the low prices of several products. Although this is the case, the Trump administration is concerned that low wages in Mexico prevent its citizens from buying US imports, therefore, creating a worse commercial trade deficit between the two countries.

For continuing information on the topic of wages in Mexico the reader is encouraged to visit our blog at https://www.tecma.com.