A Great Place to Work® in Mexico

The Tecma Group of Companies is recognized for creating workplace excellence.

Recently the Tecma Group of Companies received the honor and distinction for the fifth year in a row of being recognized as one of the top 100 workplaces in Mexico by the Great Place to Work Institute (GPTW).

The GPTW Institute is headquartered in San Francisco, California, has been in existence for a quarter of a century and, today, has offices established in forty different countries. 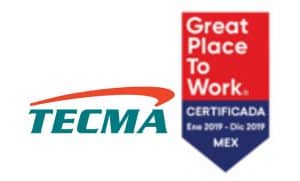 GPTW enters into workplaces in Mexico, and throughout the world, in order to shine the spotlight on those enterprises that have taken the time, and that have invested the resources and intellectual capital to create an environment that results in the prosperity of the business of each, as well as the personal and professional development of the people that they employ.

The Tecma Group of Companies is now in its thirty-fourth year. During that time, company leadership has mindfully molded a workplace in Mexico that is permeated by a core set of principles. These include:

In 2015, Tecma Juarez was certified for the first time and obtained the 82ndplace.  Considerable growth and improvements and job climate has happened since 2015.

A total of 441 Tecma administrative employees of Juarez and Tijuana participated in the GPTW survey conducted in October of 2018 to obtain the 2019 certification with a Trust Index of 75 %. This index includes the result of the survey and the evidence of Tecma practices that promotes a GPTW.  A complete portfolio of evidence was submitted for this purpose to the GPTW Institute in Mexico City.

The GPTW 2019 certification is the combined result of each leader within the company and the Top Management practices to maintain a healthy and enjoyable Great Place to Work.

In order to engage staff in one of the most notably progressive business environments in Mexico, the Tecma Group of Companies pays its employees at wage levels which exceed those that are mandated by the country’s labor law, as well as develops individualized career development plans for each of its workers. Scholarships are made available to those employees that seek to pursue higher educational opportunities outside of the workplace in Mexico, as well as creates access to resources for those adult learners that seek to finish their primary and secondary school educations.

Great Place to Work® Mexico is headquartered in Mexico City and San Francisco. In order to find the best places to be an employee of in Mexico, it has, with the guidance of its San Francisco headquarters: