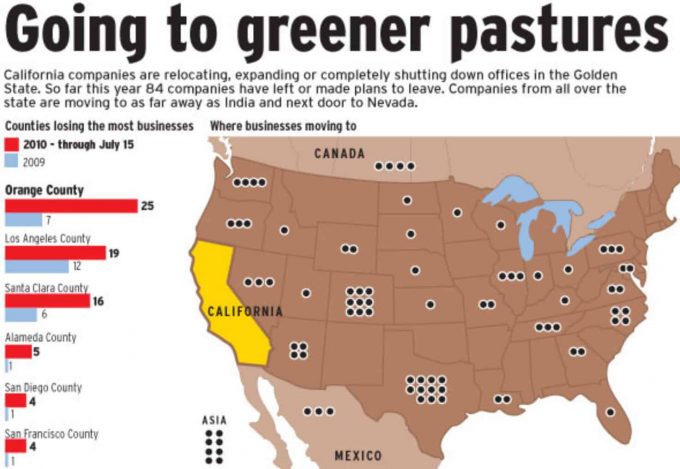 Over the past several years, the number of manufacturers leaving California has continued to grow. Thanks to a myriad of factors – from union restrictions on labor to prohibitive taxation – Manufacturing in California is leaving the state bound for other US states and even other countries, including Mexico.

In the past decade, according to some estimates, there have been a record number of disinvestment events in California. While the number ranges from 1,700 to 10,000, the fact is, an alarmingly high number of companies are giving up on California and establishing operations in Mexico, Texas, and other locations. Many of them are manufacturers who rely on affordable skilled labor and a favorable business climate. While California once provided this environment, manufactures leaving California is a clear sign it no longer does. A small sampling of the notable manufacturers to pull out in recent years includes:

Why Are Manufacturers Leaving California?

The list of factors driving manufacturing companies out of California continues to grow. Certainly one of the primary factors on the list is the complicated and prohibitive tax regime that makes profitability more and more difficult. California is already an expensive place to do business, but it’s getting worse. According to Forbes, California routinely ranks at the bottom of the worst US states when it comes to taxation. The state is ranked #48 overall, #34 for corporate tax, and #42 for sales tax.

The cost of labor is also prohibitively high in California. The state has one of the highest average costs of labor in the US, and a $15 minimum wage is slated to go into effect in 2022.

These and many other factors explain the high number of manufacturers leaving California. The state has become too expensive for leading companies to remain competitive, labor is not as efficient as it is elsewhere, and the legal framework is too complicated and restrictive to attract the innovators and creators of today. If dramatic changes are not implemented, we will continue to see a steady stream of manufacturing companies giving up on the Golden State and investing in more favorable business climates such as Texas, Florida, Mexico, and others.

The looming question is, “how is California going to continue to support costs of being a welfare state while revenue generating corporations leave the State?”  When you hear the term “welfare state,” most people think of Europe and countries like Denmark or France. No doubt those countries offer a wide range of benefits targeted to the middle class, retirees and so forth.

According to a study recently released by the Cato Institute, someone who is poor might just be better off in California. The federal government currently funds more than 100 anti-poverty programs. While no one participates in all of them, many can and do collect assistance from multiple programs.

In California a mother with two children under the age of 5 who participates in these major welfare programs – Temporary Assistance for Needy Families, Supplemental Nutrition Assistance Program (food stamps), housing assistance, home energy assistance, Special Supplemental Nutrition Program for Women, Infants and Children – would receive a benefits package worth $30,828 per year.

In fact, California’s welfare system can be more generous than every country included, except Denmark. Moreover, this benefit package doesn’t include Medicaid, which would be worth roughly $4,459 for this household.

So, where is the money going to come from?

Already manufacturing companies in California see the writing on the wall and are making a move to protect their competitive position in the domestic and global markets.  Some are fleeing the State for financial survival.

For information on subjects such as this the reader is invited to view our blog at https://www.tecma.com.