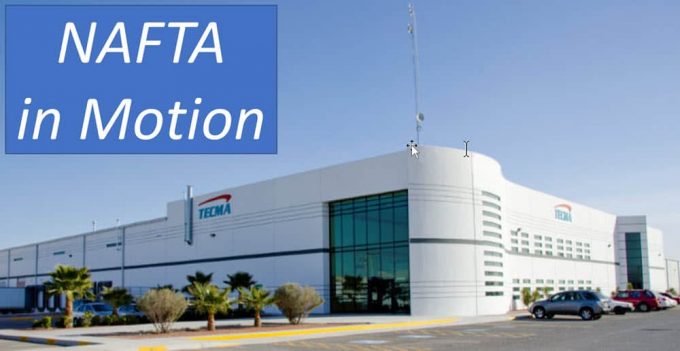 Alan Russell, Chairman and CEO of the Tecma Group of Companies, specializing in providing manufacturing shelter services in Mexico, was asked to speak at the February 23, 2017 MexicoNow event in El Paso, Texas. Alan’s chosen subject was NAFTA in Motion.  His speech included a frank discussion about NAFTA negotiations and the Border Adjustment Tax being considered in Washington at this time.

The following video plays for 25 minutes.  We suggest sitting down, relaxing and absorbing the valuable insight that Alan’s 31 years of providing manufacturing shelter services in Mexico brings.

Raised on a peanut farm in Oklahoma Alan was graduated from Southeastern Oklahoma State University with a degree in Aviation leading him to becoming an airline pilot with Continental Airlines at the ripe old age of 22!.  Enjoying the challenges of business Alan chose to focus on helping families of Mexico improve their financial lot in life by providing jobs.  To develop his knowledge of Mexico he moved to Juarez, Mexico for several years while incubating the Tecma Group of Companies.  This proved to be a wise decision as he came to learn, love and respect the people and culture of Mexico and has developed a reputation of providing the fairest and best job opportunities for Mexican families in all cities in which Tecma is located.  We believe you will learn to appreciate the nature of this innovative person who has always valued all who work with him more than himself.

For further articles on issues such as NAFTA in Motion and the Border Adjustment Tax you are encouraged to visit our blog at https://www.tecma.com.